On December 29, 2016, there is a “Master” of the mysterious player started showing up on Tygem and FoxGo servers and went on to play dozens of matches against some of the top Go players in the world.

Finally, 60 wins and 0 loss of the proud record, Master win this game.

Artificial intelligence is everywhere. But before scientists trust it, they first need to understand how machines learn.

So, let us read few data stories about the topic:

1.What Is Machine Learning And Why Is It Important?

(This is a repost from On Coding by Ed Newton-Rex, click the link to read the original:

What Is Machine Learning And Why Is It Important?)

At the end of 2016, it’s hard to escape the cultural influence of artificial intelligence. The biggest company in the world is publicly staking its future on it; Seoul came to a standstill to watch their best Go player lose to it; and millions of people have tuned in to see what HBO think it might mean for the future of humanity.

To understand its implications — and they’re big — it’s helpful to understand what it is and how it works.

Artificial intelligence is, essentially, the simulation of intelligence in computers. As such, it’s something that people have been working on for decades; the field of AI research was founded at a conference at Dartmouth in 1956. It encompasses a range of approaches, which range from the simple to the incredibly complex. If you encode a set of simple rules that let a computer never lose at tic-tac-toe, that’s a basic form of artificial intelligence.

Machine learning, on the other hand, is a form of artificial intelligence in which the computer learns for itself how to complete a task. And it’s this that has been at the heart of many of the recent huge developments in the field of AI, which might explain why interest in it has grown so much over the last few years:

How do machines learn?

An artificial neural network (the units are the dots, the connections are the arrows)

A neural network, shown an image, gives an output ‘yes’

Why is this important?

Machine learning — and AI in general — has been around for a while. But it’s recently started accelerating at a rate that’s surprised a lot of people.

This is going to have a huge effect on politics, the economy, and society as a whole. Entire industries will be automated, leaving millions of people out of work and unable to retrain fast enough to stay ahead of ever-faster technological improvements.

This, in turn, is likely to lead to discontent on a scale never seen before. The political upheavals of 2016 are an early sign of this — the populist movements that have circled the globe, which tend towards isolationism and a rejection of the huge societal changes of the last few decades, have their roots in the communities most immediately threatened by mass job automation.

(This is a repost from Forbes by Louis Columbus , click the link to read the original:

Location-based services and U.S. retail are showing the greatest progress capturing value from data and analytics. Location-based services are capturing up to 60% of data and analytics value today predicted by McKinsey in their 2011 report. McKinsey predicts there are growing opportunities for businesses to use geospatial data to track assets, teams, and customers across dispersed locations to generate new insights and improve efficiency. U.S. Retail is capturing up to 40%, and Manufacturing, 30%.  The following graphic compares the potential impact as predicted in McKinsey’s 2011 study with the value captured by segment today, including a definition of major barriers to adoption.

Machine learning’s greatest potential across industries includes improving forecasting and predictive analytics. McKinsey analyzed the 120 use cases their research found as most significant in machine learning and then weighted them based on respondents’ mention of each. The result is a heat map of machine learning’s greatest potential impact across industries and use case types.  Please see the report for detailed scorecards of each industry’s use case ranked by impact and data richness.

Machine learning’s potential to deliver real-time optimization across industries is just starting to evolve and will quickly accelerate in the next three years. McKinsey analyzed the data richness associated with each of the 300 machine learning use cases, defining this attribute as a combination of data volume and variety. Please see page 105 of the study for a thorough explanation of McKinsey’s definition of data volume and variety used in the context of this study The result of evaluating machine learning’s data richness by industry is shown in the following heat map: 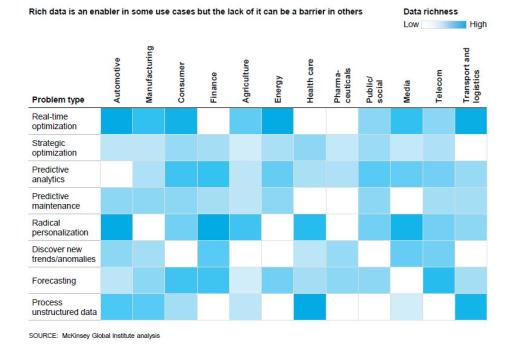 Enabling autonomous vehicles and personalizing advertising are two of the highest opportunity use cases for machine learning today. Additional use cases with high potential include optimizing pricing, routing, and scheduling based on real-time data in travel and logistics; predicting personalized health outcomes, and optimizing merchandising strategy in retail. McKinsey identified 120 potential use cases of machine learning in 12 industries and surveyed more than 600 industry experts on their potential impact. They found an extraordinary breadth of potential applications for machine learning.  Each of the use cases was identified as being one of the top three in an industry by at least one expert in that industry. McKinsey plotted the top 120 use cases below, with the y-axis shows the volume of available data (encompassing its breadth and frequency), while the x-axis shows the potential impact, based on surveys of more than 600 industry experts. The size of the bubble reflects the diversity of the available data sources.

Designing an appropriate organizational structure to support data and analytics activities (45%), Ensuring senior management involvement (42%), and designing effective data architecture and technology infrastructure (36%) are the three most significant challenges to attaining data and analytics objectives. McKinsey found that the barriers break into the three categories: strategy, leadership, and talent; organizational structure and processes; and technology infrastructure. Approximately half of executives across geographies and industries reported greater difficulty recruiting analytical talent than any other kind of talent. 40% say retention is also an issue. 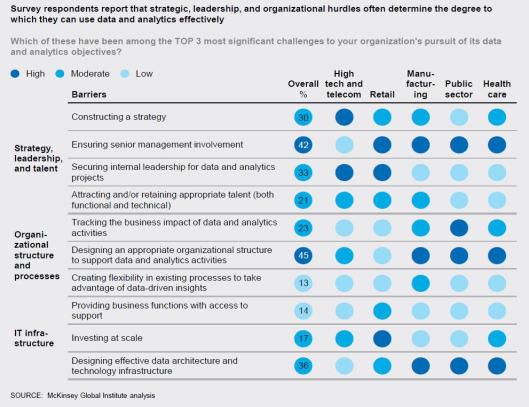 Design-to-value, supply chain management and after-sales support are three areas where analytics are making a financial contribution in manufacturing. McKinsey estimates that analytics have increased manufacturer’s gross margins by as much as 40% when used in design-to-value workflows and projects. Up to 15% of after-sales costs have been reduced through the use of analytics that includes product sensor data analysis for after-sales service. There are several interesting companies to watch in this area, with two of the most innovative being Sight Machine and enosiX, with the latter enabling real-time integration between SAP and Salesforce systems. The following graphic illustrates the estimated impact of analytics on manufacturing financial performance by area. 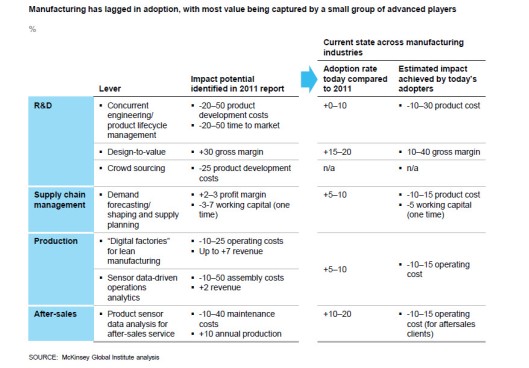 3.The Growth of Artificial Intelligence in E-commerce

(This is a repost from Inside big data by Editorial Team , click the link to read the original:

The Growth of Artificial Intelligence in E-commerce)

Our friends over at RedStag Fulfillment put together the compelling infographic below where you’ll find some interesting stats and facts about how AI is growing in e-commerce and how it’s changing the way things are done. From personalizing the shopping experience for customers to creating personal buying assistants, AI is something retailers can’t ignore. It also takes a look at some examples of how leading online stores have used AI to enrich the customer buying experience.