Everyone is talking about America’s politics, and the The New Youk Times used cubes to visualize the data and make the stories more fun to read, you can easily tell from Economy(blue), Domestic Issues(yellow) or International Issues(red)：

1.‘What Do You Think Is the Most Important Problem Facing This Country Today?’

By GREGOR AISCH and ALICIA PARLAPIANO

Since the presidency of Franklin D. Roosevelt, the Gallup polling organization has asked Americans an open-ended question: “What do you think is the most important problem facing this country today?”

As Donald J. Trump prepares for his first major address to the nation on Tuesday, he has a unique set of issues to tackle. But there is not one singular issue that is dominating the American consciousness. 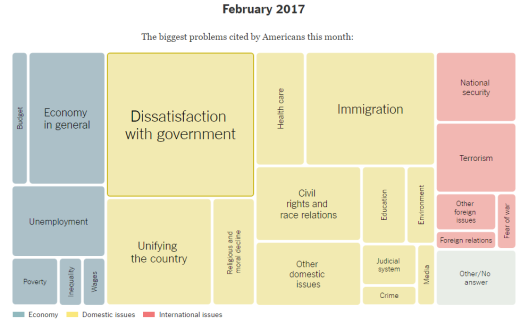 With the economy humming along and United States troops withdrawn from major wars, Americans cited a variety of domestic problems as the most important. The top response was dissatisfaction with government, a sentiment Mr. Trump harnessed during his populist campaign.

“For too long, a small group in our nation’s capital has reaped the rewards of government while the people have borne the cost. Washington flourished, but the people did not share in its wealth.” 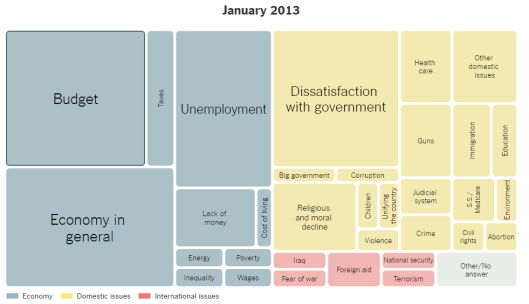 Barack Obama entered his second term after a major budget showdown with Congress and with another fiscal deadline, the federal debt ceiling, approaching. Mr. Obama regularly criticized Republicans for using the debt limit as a bargaining chip to cut spending.

“So while I’m willing to compromise and find common ground over how to reduce our deficits, America cannot afford another debate with this Congress about whether or not they should pay the bills they’ve already racked up.”

‘What Do You Think Is the Most Important Problem Facing This Country Today?’

2. You Draw It: What Got Better or Worse During Obama’s Presidency

Readers could draw their own lines (yellow) on the charts and see what happens: 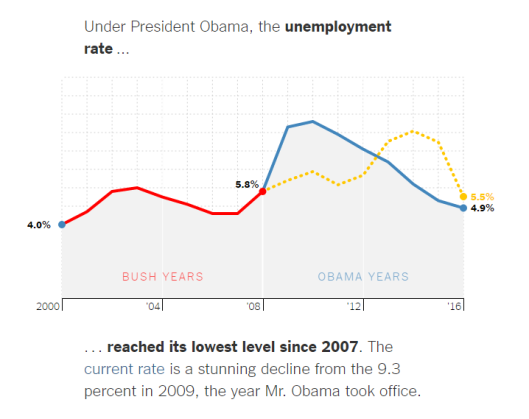 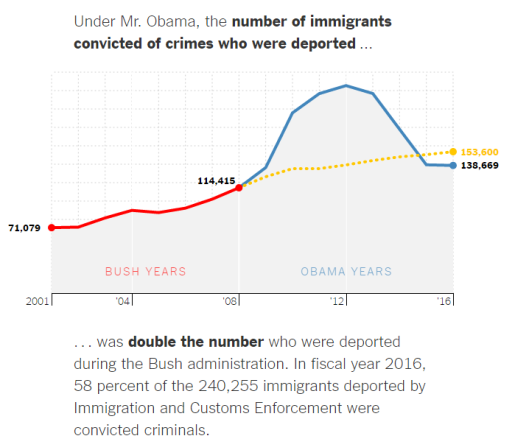 You Draw It: What Got Better or Worse During Obama’s Presidency

Data and investigation by Buzzfeed

Visualization of 1.500 individuals and organizations connected directly and indirectly to Donald Trump. To explore the network further select one of the connections on the right of the graph or search below.

A real-estate attorney who was involved in [Kushner’s] retail-space negotiations, per New York MagazineAnbang would become one of the equity partners in the [666 Fifth Avenue] redevelopment if an agreement is finalized, per New York Times