The Sharing Economy is a socio-economic ecosystem built around the sharing of human, physical and intellectual resources.

Whilst the Sharing Economy is currently in its infancy, this is only the beginning: in its entirety and the potential, it is a new and alternative socio-economic system which embeds sharing and collaboration at its heart – across all aspects of social and economic life.

The leading businesses that are advancing the concept of the “sharing economy” are in many respects no longer insurgents and newcomers. The size and scale of Uber, Airbnb and several other firms now rival, or even surpass, those of some of the world’s largest businesses in transportation, hospitality, and other sectors. As the economic power of these technology-driven firms grows, there continue to be regulatory and policy skirmishes on every possible front, across cities and towns spanning the United States, Europe and beyond.

Here is one example in China:

(This is a re-post from Financial Times by Yuan Yang in Shanghai and Xinning Liu in Beijing, click the link to read the original: China’s bike-sharing boom in charts)

Shanghai leads world in bike-sharing, but authorities are cracking down on the industry.

2.The fall and rise of physical book sales worldwide – in data

(This is a re-post from The Guardian by Marianna Spring and Cath Levett, click the link to read the original: The fall and rise of physical book sales worldwide – in data)

Nielsen, which tracks book sales in several countries, released 2016 figures to coincide with this week’s London Book Fair. They show a mixed bag: physical sales are up in the UK, US and Ireland but down in Italy, Spain, Australia and South Africa.

This has less to do the rise of ebooks than the volatility of book markets, which, according to Nielsen’s director of book research, Hazel Kenyon, can be swayed by trends and the success of individual titles.

Nothing demonstrates this quite as well as Brazil’s book sales, which have fluctuated wildly since 2013. Sales more than doubled in 2014, partly due to the runaway success of a cookbook by priest-turned-chef Padre Marcelo Rossi. But between 2015 and 2016, book sales fell by 9.7%.

In Ireland book sales rose by a notable 9% between 2015 and 2016. However, this is attributable in part to the success of titles marking the 100th anniversary of the Easter Rising.

It seems the UK and US can thank a year of political turbulence in part for their increase in print sales. In the UK, parodies such as Five on Brexit Island, as well as children’s titles and lifestyle books, helped sales climb by 2.3%. In the US, religious and self-help titles contributed to a 1.3% rise. 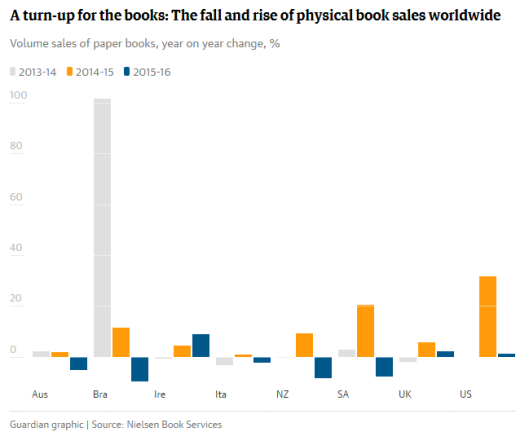 (This is a re-post from South China Morning Post, click the link to read the original: Who rules China) 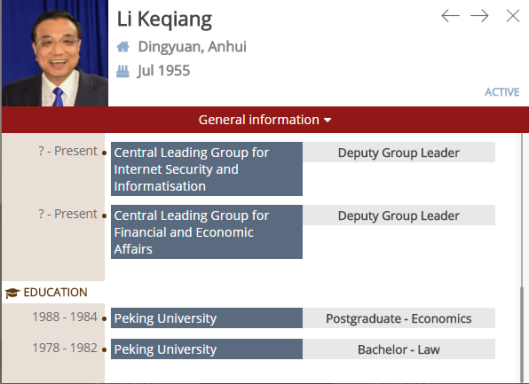 2 thoughts on “Data News of the Week”