According to the Policy Address 2018 (published in October 2018), Carrie Lam , the Chief Executive of the HKSAR Government, has made a total ban to e-cigarettes and other new tobacco products. However, as claimed by the proposal from the Hong Kong government in June 2018, e-cigarettes and other new tobacco alternatives would be regulated in the same way as conventional smoking products.

Let’s run deep into the reason why the government made a big turn on the issue of whether e-cigarettes should be banned or regulated.

In 2017, the major reason for people start smoking is being influenced by friends, which is 48.21%. Curiosity is the second reason that urge them to smoke.  Especially for people start smoking because of their friends, this reason kept major throughout these 10 years since 2008. According to a study from the University of Southern California in Los Angeles in 2015, 41% of more than 2000 teenagers said that they had tried e-cigarettes recently but they had never tried conventional cigarettes, in which if their friends also smoke e-cigarettes, they had even more positive views to them.  That means, teenagers perceptions of e-cigarettes can be influenced by their friends, which matches with the result done by the HKSAR Government.

Some people claim that e-cigarette are less harmful than traditional cigarette, but is it true? Referring to figure 1, the cartridge part helps storing liquid solution of glycerol, flavouring and nicotine, which are some toxic elements that can cause cancer. Hong Kong Baptist University carried out a test on 13 e-cigarettes. It found that the e-cigarettes contain some well-known harmful hazardous chemical substances,such as polycyclic aromatic hydrocarbons and formaldehyde. Also, the School of Public Health of the university of Hong Kong found that students who use e-cigarette will rise the risk of having respiratory symptoms. 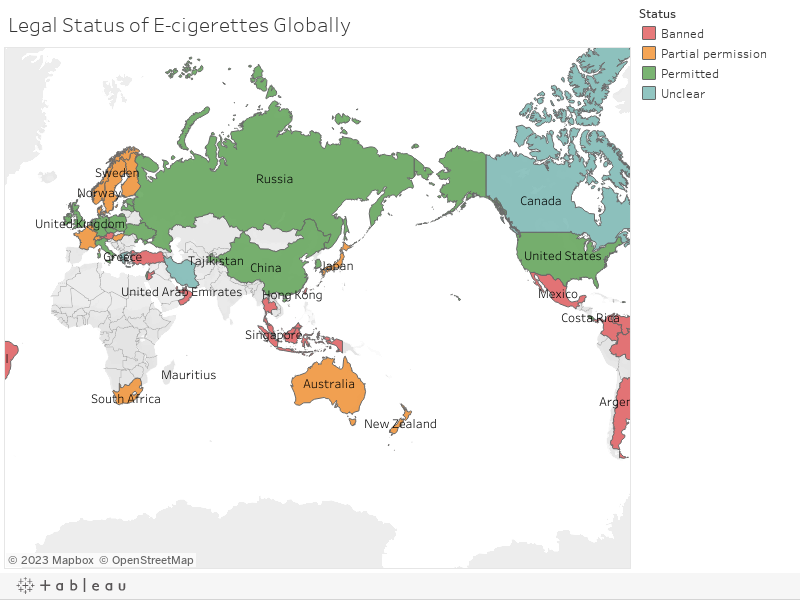 Status with green colour such as Russia, China and the United States, are representing e-cigarettes are permitted. Status with orange colour including Australia, Sweden and Norway etc. has partial permission. Moreover, status with red colour means that the policy is totally banned. Status like Canada and Iran, which with blue colour means e-cigarettes policy is unclear.

According to the graph, if partial permission is also calculated in the category of e-cigarette-banned country, countries having negative stands on e-cigarettes are far more than e-cigarettes permitted countries.

In September 2018, the FDA of the United States made a statement that teenagers from the US were overwhelmed by smoking e-cigarettes.  And they announced that they would consider a ban on flavored e-cigarettes in response to the current problems. At last, they officially announced to crack down on tobacco products aimed at young people in November 2018.  Look at Hong Kong’s situation – the new tobacco products started to emerge these years that everyone can buy or even sell e-cigarettes. By summarizing all the statistic results, it seems that the government also noticed that one of the e-cigarettes permitted country – the United States, also try to use various ways to restrict the use of e-cigarettes and new tobacco products for teenagers.

In Carrie Lam’s speech in Policy Address, she said that e-cigarettes are often packaged as better substitutes to normal cigarettes, with promotional activities often targeting young people. But the harmful effects of these products may have been underestimated.  With the use of government data and some sources worldwide, that proves the main reason for the government making a U-turn on the issue of whether e-cigarettes should be banned or regulated.