A video of a sea turtle with a plastic straw lodged in its nostril went viral last year and it shows that plastic waste will cause serious pollution problems to our environment.

Hong Kong is a fast-paced city that people always pursue convenience in their daily life. Disposable products are always been used in our daily life in order to be more convenient. These disposable wastes are mainly made of plastic such as bottles, plastic bags, disposable tableware and so on. Most of them will finally go to landfill as the process of recycling has not well-developed in Hong Kong yet. The above graph illustrates the increasing trend of consumption of plastic products in Hong Kong. The average daily consumption amount of plastic is extremely high that it has been over 2000 tonnes per day since 2015.

We can see how serious is the problem of wasting plastic disposable products from the data showing below.

From the graph above, we can see that the consumption amount of plastic disposable tableware in domestic waste is higher than that of the commercial waste. It shows that people’s habit of using disposable products instead of reusable products is one of the factors that lead to the problem. 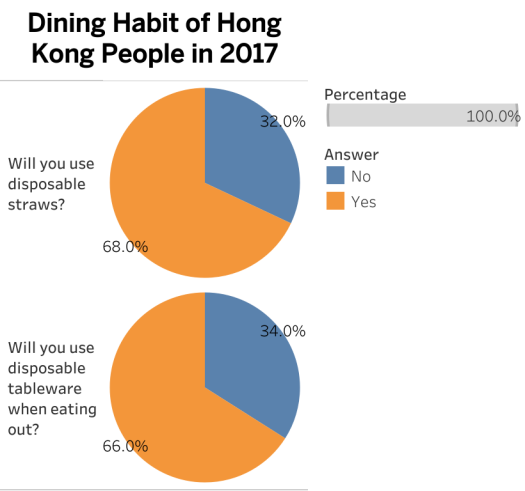 Also, Green Sense uses the data collected in the survey to estimate the amount of plastic waste used in lunchtime of 10 food courts in 20 days. It is estimated that over 350 million pieces of disposable tableware will be wasted that the weight is equivalent to the weight of an adult white whale.

Disposable waste will only be used within a few minutes but it requires more than a hundred year to be fully dissolved after using, which caused a serious harm to our environment. Vivian Yuen, the project coordinator of the Green Sense, said” most of our disposable waste will go to landfill at the end because it is hard to recycle the disposable tableware after being polluted by the food waste.” A large amount of these waste will speed up the pace of landfill to be full and worsen the environmental problems in Hong Kong.

Vivian also stated that when people handle disposable waste in an improper way, it may lead to serious pollution in marine and hence affecting the habitat of marine animals. Marine animals may eat this disposable waste when it is dissolved into microplastic. Finally, it will affect our health as the plastic goes into the food chain and ecological cycle.