Hong Kong ranked 11th among the world’s safest cities with only 0.1 percent of the population held in custody. We look into the reasons why people get imprisoned and the treatment they receive in jails. Although prison time isn’t supposed to be easy, some of the results may surprise you.

Unlawful residence – the no. 1 cause that put people into prison

Offenses breaching local laws are the primary reason people get into a correctional facility in Hong Kong. Often these offenses have to do with residing unlawfully in Hong Kong or breaching some condition of one’s stay in Hong Kong. Additionally, holding dutiable commodities without paying the concerned taxes and breaching import or export regulations also fall into this category. 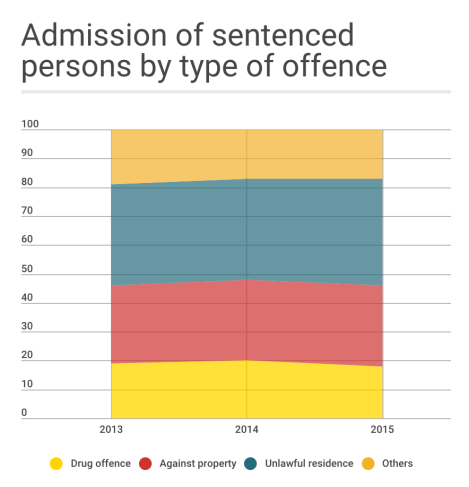 Compared with Taiwan, which shares similar crime rate and safety index as Hong Kong, the occupancy rate of correctional facility in our city is not that high in general.

However, when we take a detailed look into the data, some of the correctional facilities are  overcrowded. For example, the Tai Lam Centre for women has an occupancy rate of 117.2%. While some of the facilities are underuse, with less than 10% of usage.

In Hong Kong, there are in total 29 correctional facilities, including correctional institutions, halfway houses and custodial wards of public hospitals. They are under the control of the Hong Kong Correctional Services.

Each of the facility has a limited capacity. Among them all, Stanley Prison, the first prison in Hong Kong, has the largest capacity that it can take up 1511 people at most.

Into the prison: only three people got tertiary degrees each year

Getting into jail does not mean an end to education. To get people prepared for reintegration after their sentence, most prisoners, especially young persons in custody, receive half-day compulsory education to take public examinations.

They may opt for subjects like Liberal Studies, Chinese, English, mathematics, Tourism and Hospitality and Economics in HKDSE. The number of people who took the entrance exam stayed below 20 each year and those who graduated in prison stayed between two to three from 2010 to 2015.

Inmates need to engage in different types of work including garment-making and bookbinding. Correctional officers assign work based on vacancy, educational background and the length of sentence.

Making about HK$44.59 and HK$192.01 per week, an average prisoner can only make a maximum of HK$9,984.52 a year. For Thomas Kwok Ping-kwong, a property tycoon whose annual salary is estimated to be HK$2.82 million according to Forbes, the amount he can make during his sentence is very little in comparison.

Getting past prison life: success rates of drug offenders remain lowest in years

As can be seen in the graph, the participants of the “drug addiction treatment centre” are struggling most to meet their objectives outside of prison, which might in part be explained by the fact that their goals are two-fold (non-conviction and “staying clean”), unlike the other groups.

After sentence: no concrete figure to show discrimination at workplace

The majority of rehabilitated persons are not subjected to statutory supervision after release based on Hong Kong laws, a statistics that the Correctional Services Department cannot provide.

Most prisoners are encouraged to receive post-release employment follow-up services provided by relevant non-government organizations on a voluntary basis.

Between 2015-16, 608 persons in custody completed vocational training in adult correctional institutions before release and received a 6-month period of follow-up employment services provided by relevant NGOs.

A total of 334 (54.9%) people were successfully contacted and their corresponding employment rate (i.e. being employed within 6 months after release) was 82.0%.