Do you still remember the massive Panama Paper leak in 2016? When 13.4 million financial documents were released in this November, the offshore paradise islands got global attention again. Paradise Papers cover the time period from 1950 to 2016, including the more than 120,000 people and 25,000 offshore companies.

Tech-savvy readers can jump to the database directly. Like before, the dataset is modelled as a graph, namely treating the Officers, Intermediaries and Addresses as nodes and their relationships as links. Neo4j is one widely adopted graph database. Its web user interface, called “neo4j browser”, allows journalists to visually expand and explore a graph. The query language “Cypher” is a superset of relational query (SQL), full-text search and graph pattern matching. Its flexibility and built-in graph algorithms allow experienced journalists to systematically study the underlying graph. The download page on ICIJ includes snapshots of four neo4j databases exported in CSV format.

☞Secrects of the Paradise Papers [Link]

Data news could not only tell by graphs but also short informational videos. The Guardian uses the video to introduce the Paradise Papers.

The offshore secrets of the documents related to some biggest companies, global royalty, and some celebrities. It is huge works for investigators to deal with the mass database and the “Cartogram” is a good way to tell the story. It has been an impossible task to check whether the customer is just a contact or if they have used Appleby services over many years. It is a rarely seen form of cartogram where geo-regions are distorted to standard circles and divided the customers into three parts: North America, Europe, and Asia. Many clients of the Paradise Papers come from the UK, China and Hong Kong, however, the largest numbers are from the US. 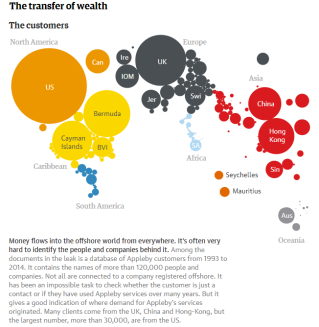 By comparing with Panama Papers we could learn that this time the Paradies Papers database is the world’s second-biggest data leak and a total of 381 journalists from 67 countries have been analysing the material.

More read: What are the Panama Papers? A guide to history’s biggest data leak

International Consortium of Investigative Journalists also known as ICIJ did a great job on the Paradise Paper leak of Appleby.

By releases Paradise Paper data from Appleby and cooperate with the journalists all around the world, ICIJ analyses the connections of the offshore companies and the political power players.

The visualization contains relevant information in relation to the profiled individual. ICIJ used Linkurious to show the connections. Such as Brian, the prime minister of Canada from 1984 to 1993. “Mulroney is listed in Appleby’s files as a director between 2004 and 2009 of Said Holdings Limited, a Bermuda company controlled by controversial Syrian-Saudi businessman Wafic Said.”

In this project, ICIJ explores the offshore connections of 13 Trump advisers, donors and cabinet members. Just like Rex Tillerson, the US secretary the administration. Before he joined the Trump’s team, he served at the oil giant ExxonMobil. Most of the Trump’s team get a closer relationship with big companies for own a huge trust fund.

☞Everything needs to know about the Paradise Papers. [Link]

BBC also did a marvellous job on Paradise Papers. This project does some background check and shows the information about what is Appleby and how big is the Paradise Papers leak.

Most exciting part of the project is BBC combine all the key people and tell every story by some reader-friendly pictures. Such as Queen’s private estate invested £10m in offshore funds;  how the Duchy of Cornwall’s (Prince Charles)  offshore investments help him to earn money; how F1 champion Lewis Hamilton avoided tax on his £16.5m luxury jet …

2. Paradise Papers Shine Light on Where the Elite Keep Their Money

2 thoughts on “Data News of the Week | Paradise Papers”