Summary: In this article, from the graph of major holding companies and it’s main shareholders under Richard Li Tzar Kai, Victor Li Tzar Kuoi, and Li Ka-shing, we found in what areas are they investing and the complex network of relationships between subsidiaries. By analyzing the annual reports of Victor Li Tzar Kuoi and Richard Li Tzar Kai’s company’s companies, we can determine whether Li Ka-shing made the right decision when he announced his retirement.

We grabbed the information from Who’s Who and HKEX(The Stock Exchange of Hong Kong Limited) and got the name of major holding companies and main shareholder of companies. after establishing their relationship, we got graph below.

END_OF_DOCUMENT_TOKEN_TO_BE_REPLACED

Summary: Dream of the Red Chamber, also called The Story of the Stone, composed by Cao Xueqin, is one of China’s four great classical novels. Long considered a masterpiece of Chinese literature. The novel is generally acknowledged to be the pinnacle of Chinese fiction. We use the graphics tool to analyze the short path, centralization, structure of degree, clustering coefficient and the clique of those data. And try to find out how closely those characters are connected, and who might be the Social Queen or King in this story.

According to analyst Jiang Qi, there are 448 characters in “A Dream of Red Mansions”. We picked 187 characters who are relatively more important than others in this book and use the graphics tool to analyze these data and get the network below to show their relationship in the Dream of the Red Chamber. 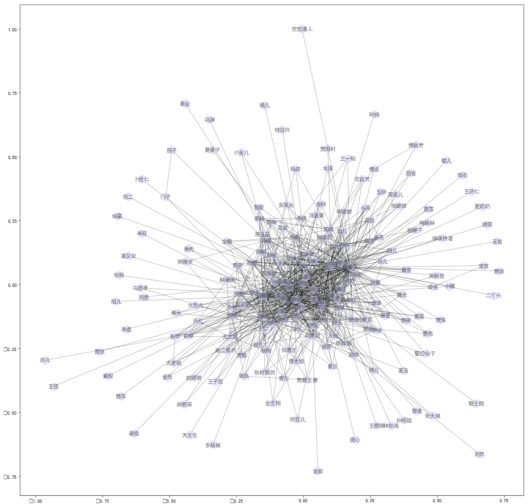 The relationship between the 187 characters in the book