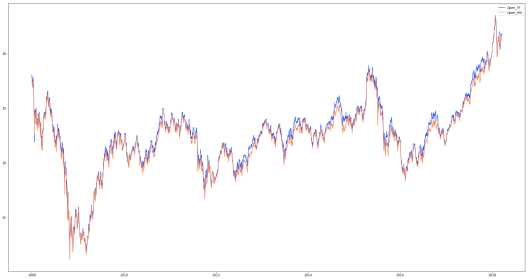 Summary: In this article, under the context of Hong Kong’s Mandatory Provident Fund scheme (MPF), we find that some Exchange Traded Fund (ETF) occupy large holdings in a particular MPF fund. By calculating the tracking errors over the past ten years, the year of 2008 stands out with the highest tracking error, which corresponds with the global financial crisis. In other years with more stable stock markets, ETF performs relatively well. We also calculate returns between two ETFs and the indexes they track respectively; the results turn out to be different.

We use Python as a calculator, rely on pandas to read csv files downloaded from Yahoo Finance, and time series to present data in the form of charts.

Hong Kong has a rapidly aging society. According to the Population Projections released by Census and Statistics Department, HK is expected to have a third of its population that aged 65 and above by the mid of 21st century. There is a growing concern over the issue of social security especially for the elderly, since the burden for the employed population in the future to take care of the retirees will be unbearable.

END_OF_DOCUMENT_TOKEN_TO_BE_REPLACED

Summary: Everyone seeks fortune. But managing financial affairs is not an easy cook for the general public since that business jargon and the complicated fluctuations in price have confused many investors who merely have the faintest idea of investment. At this point, bonds — a fixed income investment with a defined holding period — draws the attention of many, yet a less risky basket of this kind could still be affected by the ever-changing market.

Thus, we used Python and the universally-acknowledged bond valuation method, Discounted Cash Flow (DCF), to design an efficient and easy-understanding calculator to help green hands to estimate if they can receive the expected proportion of benefit from a given bond.

Understanding Bonds: What is a Bond and How Bonds Work

“A bond is a fixed income investment in which an investor loans money to an entity which borrows the funds for a defined period of time at a fixed interest rate.”

END_OF_DOCUMENT_TOKEN_TO_BE_REPLACED

If you still don’t know what is “blockchain” or what is “bitcoin”, The recent work from Max Galka will assure you this is the high time to do some self-study, or you will miss the birth time of “another Internet”. The idea of ICO, Initial Coin/Chain Offering, is an analogy of IPO. With the inception of “smart contract” capability, fundraising, a process to exchange currency to certificate, can be done in a distributed manner. The “currency” in the chain world can be Ethereum, NEO, BitCoin, … The “certificate” in the chain world is called “token” so the ICO process is also referred to as “token sale”. The convenience of ICO gains rapid growth with crazy capitals pouring into this field. Just check out this interactive/ animated token sale history. 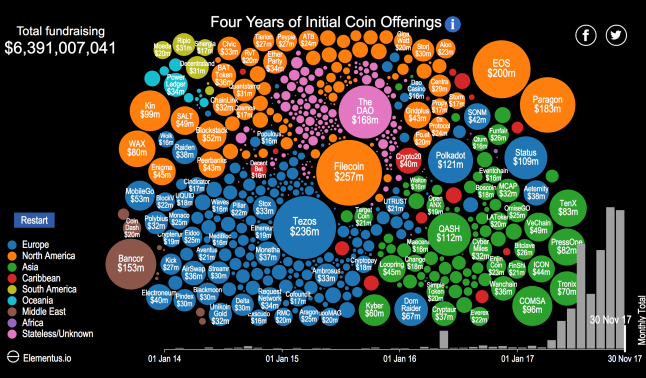